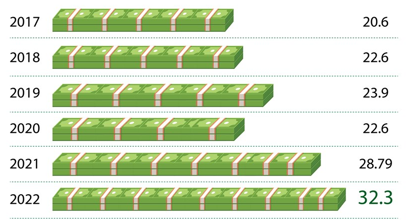 BE A LOGISTICS MUST KNOW THIS

Vietnam’s economy back on track for strong recovery: Singaporean daily

Fishery export declines in May 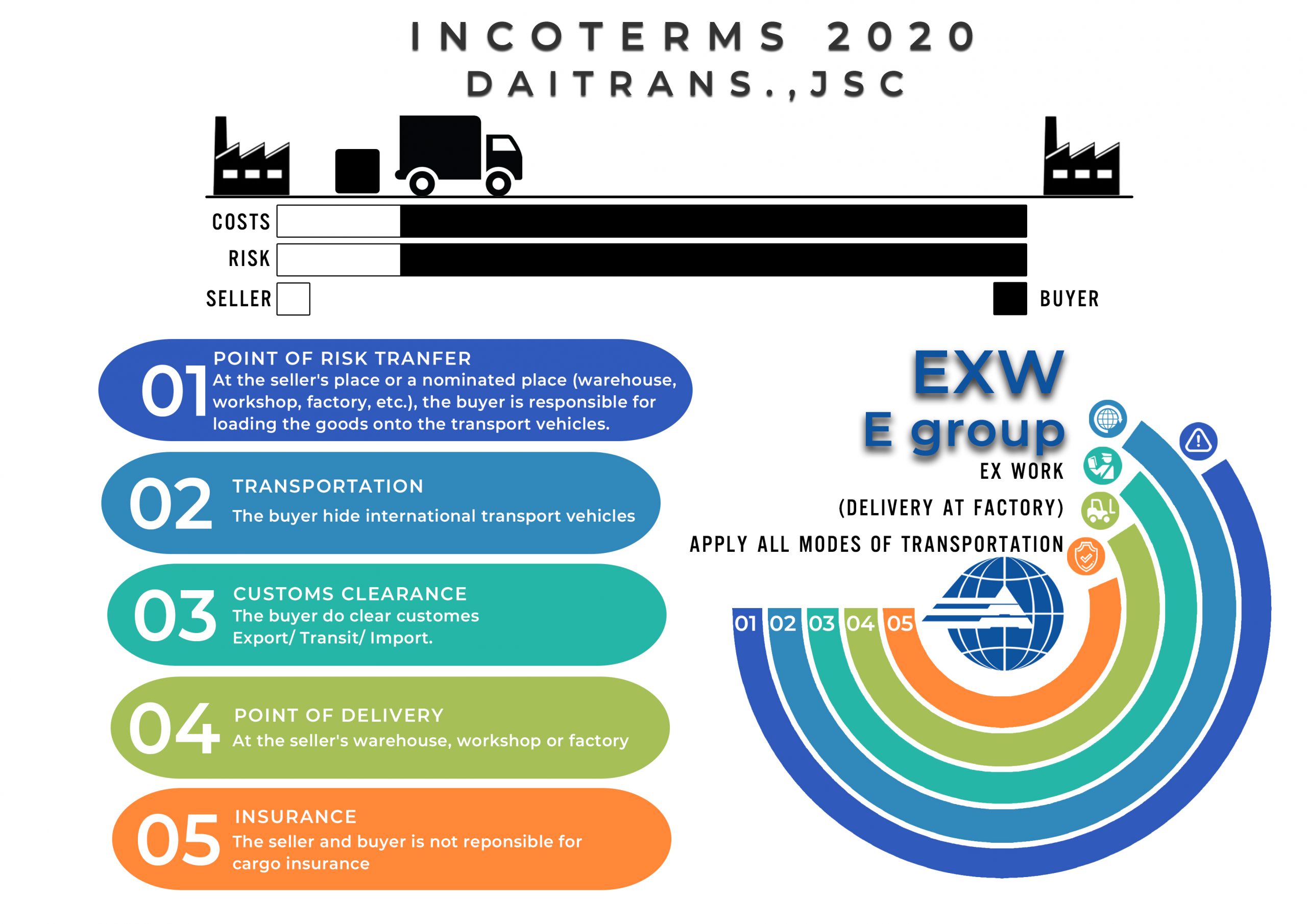 BE A LOGISTICS MUST KNOW THIS

Born in 1936, Incoterm is now considered as the logsitcian’s multiplication table. Daitrans would like to send to our honoured customers and partners a summary of the incoterms 2020. Hope this article will bring a lot of useful knowledge to everyone. 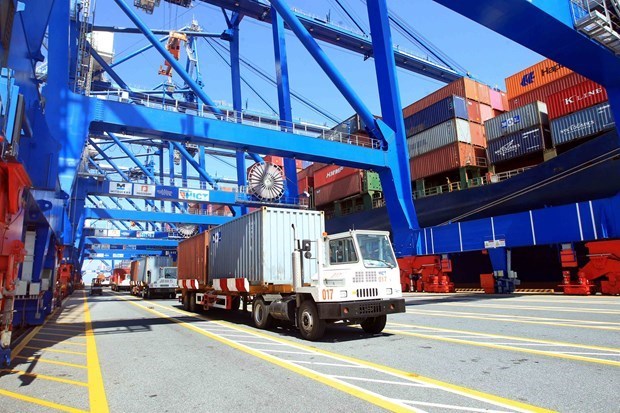 Vietnam’s economy back on track for strong recovery: Singaporean daily

2022-07-14 10:11 NDO/VNA – In an article posted on July 12, The Business Times of Singapore cited some economists’ opinions that said Vietnam’s economy is back on track for a strong recovery this year. John Paul Lech, portfolio manager at Matthews Asia, said Vietnam is a frontier market star. While frontier markets are generally smaller, less liquid and have limited foreign investor access, it has bucked the trend. For the first six months of 2022, foreign direct investment (FDI) into Vietnam grew by nearly 9% to 10.1 billion USD. Economist Chua Han Teng from DBS, the largest bank in Singapore, forecast Vietnam’s GDP expansion will reach 7% this year to meet the set target. He held that the service sector will continue growing fast when COVID-19 is classified as an endemic disease. The service sector, especially retails, is bouncing back strongly while the number of new businesses is increasing. He added Vietnam is emerging as an exporter of information and communications technology, and its market share may develop further. The United Overseas Bank (UOB) recently upgraded the country’s GDP growth forecast for 2022 to 7% from 6.5% basing on a simulation that there won’t be any more serious disruptions caused by the pandemic. The optimism was supported by a higher-than-expected GDP growth rate in the second quarter, at 7.7% compared to the same period last year – the fastest pace in 11 years and much higher than the previous estimate of 5.9%. This strong recovery was driven by manufacturing activities which have accelerated for four straight quarters and the rebounded service outputs which have continued regaining its foothold since the last decline in the third quarter of 2021. However, economist Yun Liu said despite an optimistic growth trend, the energy crisis has begun affecting Vietnam’s growth, recommending the country pay [...] 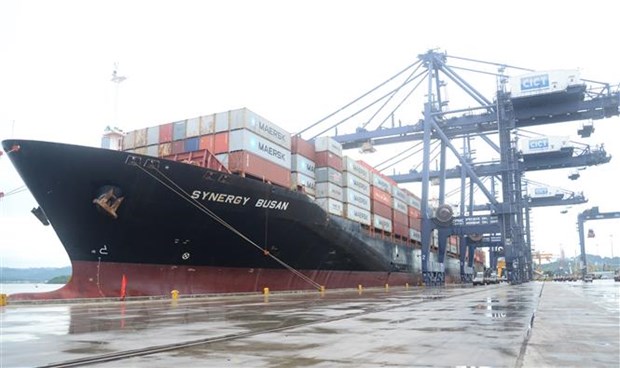 2022-07-05 10:45 HCM CITY — HCM City is seeking to build a US$6-billion international container terminal in its coastal Cần Giờ District. It plans to carry out the construction together with the Việt Nam Maritime Corporation (VIMC) and Mediterranean Shipping Company (MSC). VIMC and its subsidiary, Saigon Port, have tied up with foreign partners to concretize the contents of cooperation, investment and operation. Saigon Port and MSC have done studying the proposed site of around 570 hectares with a main wharf of 7.2km and capacity to berth ships of up to 250,000 tonnes. Located in the Thị Vải maritime channel, Cần Giờ has deep waters and is not seriously affected by waves or winds, and is ideal for international container transhipment. Along with natural and economic factors, the co-operation of large global shipping lines is also essential for success. VIMC has been working with MSC, the world’s second-largest container shipping company, to develop seaport infrastructure in Việt Nam. MSC operates a fleet of more than 625 ships. The project has a designed capacity of 15 million TEUs. The two sides are working hard with foreign partners to finalise plans for investment and operations. According to statistics from VIMC, in 2021 the volume of container goods passing through the country’s ports, mainly in HCM City, Bà Rịa-Vũng Tàu Province and Hải Phòng City, was 23.9 million TEU, but international transhipment was relatively low. In 2015 – 20 the volume of goods passing through HCM City’s ports grew by an average of 7.34 per cent a year, and it is expected to fall to 5 per cent in 2021-25. In 2021 the volume was 164.19 million tonnes as against a target of 116.9 million tonnes and even higher than the target for 2030 of 160 million tonnes. In the event, the early [...] 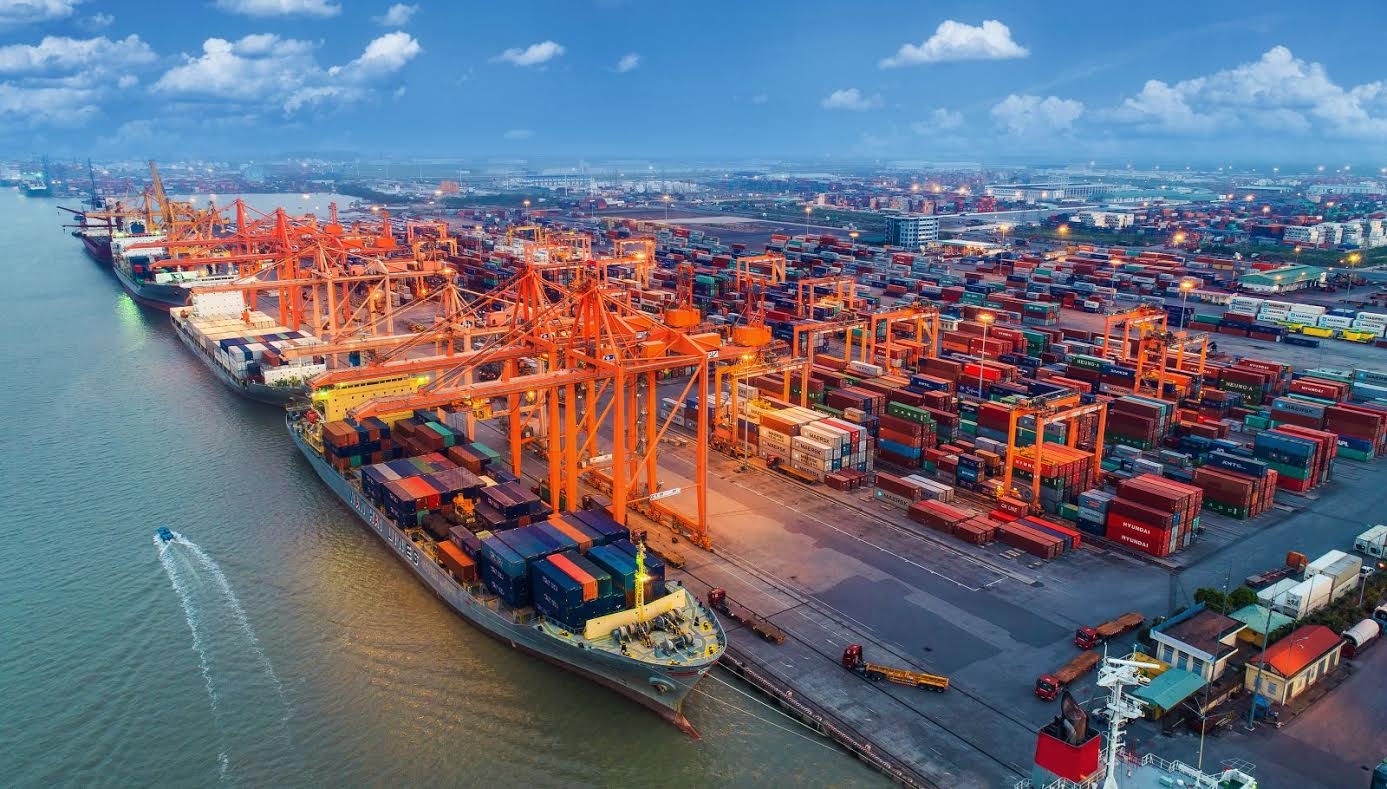 2022-06-29 22:03 NDO/VNA – Vietnam enjoyed a trade surplus of 710 million USD in the first six months of 2022, the General Statistics Office (GSO) reported on June 29. According to the office, in the first half of this year, total import-export revenue is estimated to reach 371.17 billion USD, up 16.4% year on year, with imports of 185.94 billion USD, a rise of 17.3% over the same period last year. In the period, the domestic economic sector suffered trade deficit of 15.97 billion USD, while the foreign-invested sector saw trade surplus of 16.68 billion USD. In June, import-export turnover is estimated at 32.65 billion USD, up 5.6% over the previous month. In the second quarter of 2022, export revenue reached 96.8 billion USD, a rise of 21% year on year and 8.7% over the previous quarter. In the January-June period, 28 products recorded export revenue of over 1 billion USD, and five earning revenue exceeding 10 billion USD. The GSO reported that the country imported about 32.37 billion USD worth of products in June, pushing the total imports in the first half of 2022 to about 185.23 billion USD, an increase of 15.5% year on year. The US remained the largest export market of Vietnam so far this year buying about 55.9 billion USD worth of products. China is the biggest source of Vietnam’s imports with 61.3 billion USD. In the first six months of 2022, Vietnam saw a 39% rise in trade surplus with the EU to about 15.5 billion USD. Meanwhile, the country suffered trade deficit of 35 billion USD with China, up 21.7%. In order to promote exports in the time to come, the Ministry of Industry and Trade advised local exporters to apply measures to avoid risks during export activities, while optimising advantages from 15 [...] 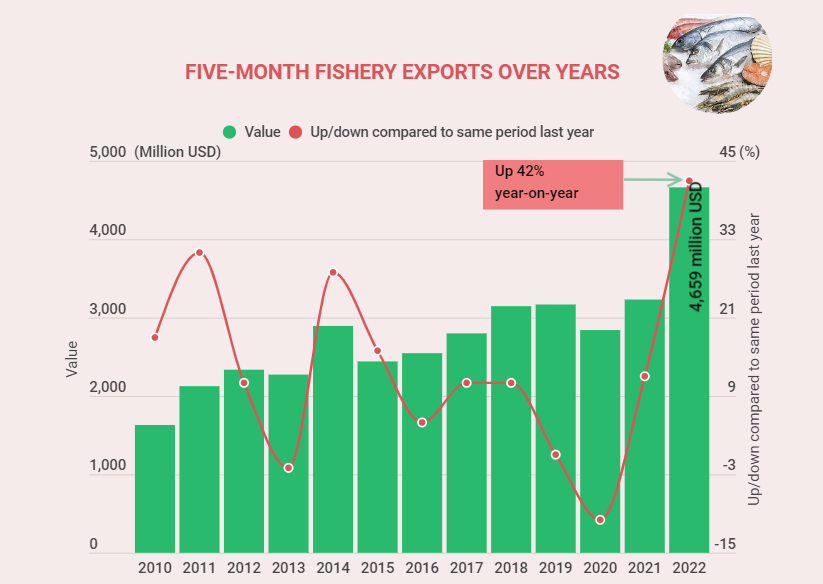 2022-06-20 16:51 Fishery export turnover this May hit the 1-billion-USD benchmark, posting a year-on-year rise of 27 percent and bringing the figure in the first five months of the year to more than 4.6 billion USD, up 42 percent compared to the same period of 2021. 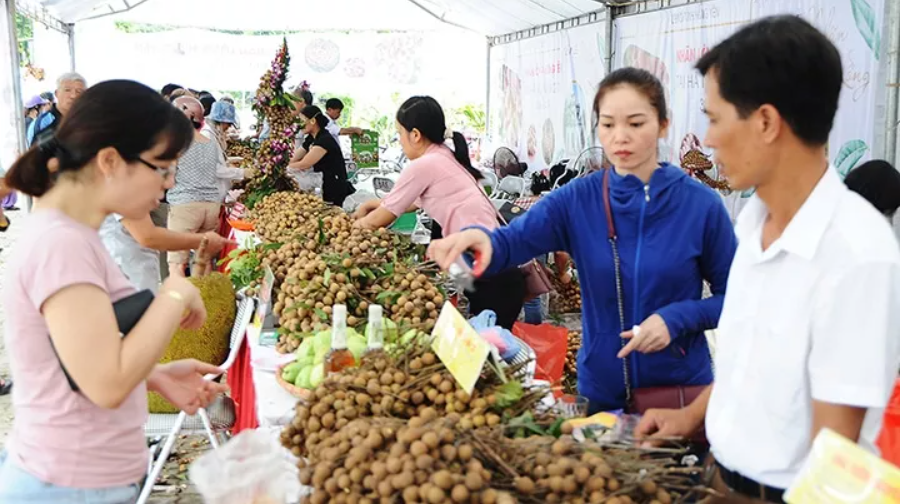 16-06-2022 09:02 NDO/VNA – Many Vietnamese fruits are getting final negotiation steps done to enter new markets, with passion fruit approved by China and green-skin pomelo on the way to the US. According to Le Van Thiet, deputy head of the Ministry of Agriculture and Rural Development’s Plant Protection Department, China has allowed piloting the import of Vietnamese passion fruit into Guangdong province via its border gates with Vietnam’s Lang Son and Quang Ninh provinces. The fruit must have growing area and packaging codes and meet food safety standards, among other criteria. Vietnam’s negotiation for exporting durian to China also entered the final phase, with the sides working to complete a protocol regulating related plantations, codes of distributors, and diseases control. Meanwhile, the US has already permitted the import of six Vietnamese fruits. The two sides are in their final step of negotiation for the fruit to enter the US market based on American consumers’ demand. For the Japanese market, which has accepted Vietnam’s dragon fruit, lychee, and mango, the Plant Protection Department is negotiating the export of local longan using a new cold processing method. In order to catch opportunities, many localities are preparing growing areas and material sources. Notably, Gia Lai has made passion fruit one of its four key fruits. By 2025, the Central Highlands province plans to increase its passion fruit plantation to 20,000ha from the current 4,000ha. 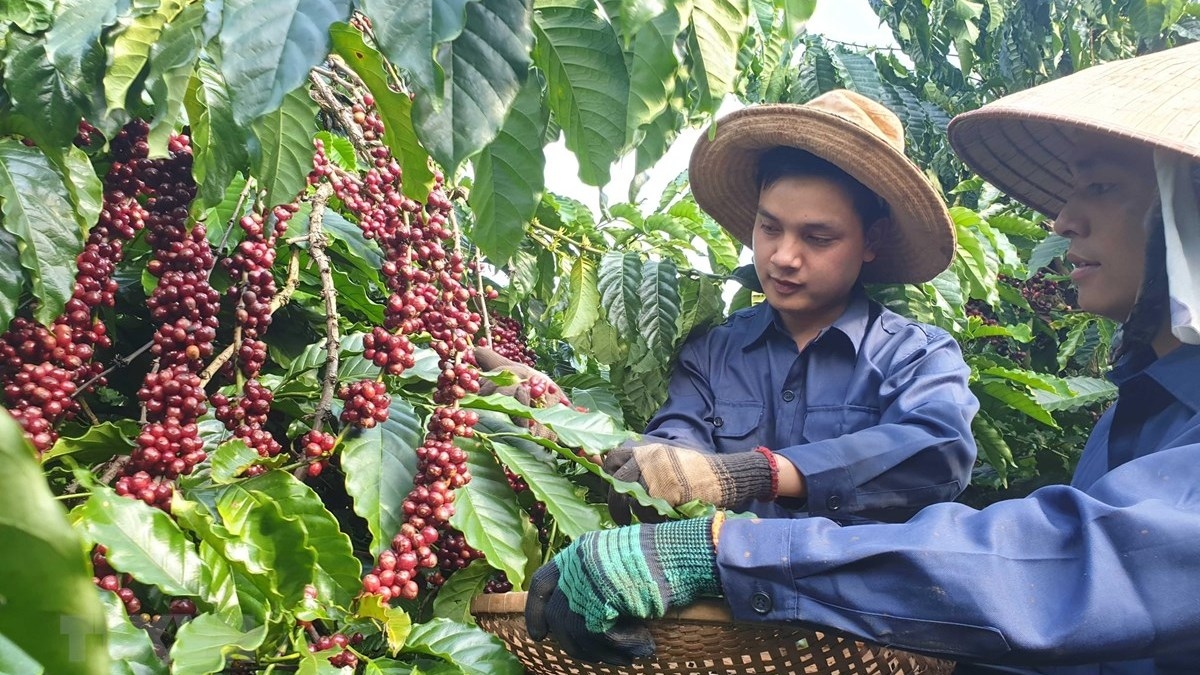 2022-06-08 9:47 Vietnam earns over 2 billion USD from coffee exports in the first five months of 2022. (Photo: VNA) Font Size: | NDO/VNA – Vietnam shipped 889,000 tonnes of coffee overseas for more than 2 billion USD in the first five months of 2022, up 24.2 and 54 percent year on year, respectively. In May alone, the country exported 150,000 tonnes of coffee worth 343 million USD, down 4.7 percent and 5.4 percent, respectively. According to the Ministry of Industry and Trade’s Agency of Foreign Trade, the average price of Vietnamese coffee was estimated at 2,251 USD per tonne, an annual increase of 24 percent. The agency predicted a rising trend for coffee prices in the time to come. This is an opportunity for coffee exporters, including those from Vietnam, it said. In 2021, the country’s export value of coffee, mainly Robusta, reached 1.52 million tonnes, worth of about 3 billion USD, down 2.7 percent in volume, but up 9.4 percent in value year on year. The Vietnam Coffee and Cocoa Association has targeted an export turnover of 5-6 billion USD from the product in 2030.
Sales 1
0912 398 311